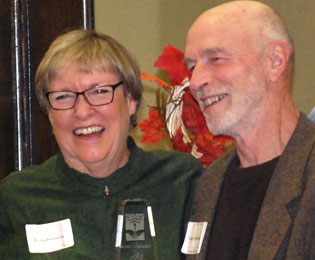 “Find a need and fill it.” This San Francisco cement company motto also describes a couple active among Idaho progressives since the 1970s. Coming from different backgrounds and parts of the country, they each applied their experience and interests to serving their adopted state. In positions of volunteer and elected leadership, careers and avocational endeavors, they have touched many lives and affected a broad range of issues.

Gary Richardson and Diane Ronayne met in 1978. As the Idaho Conservation League’s first field organizer, Gary went to Twin Falls to talk land use and energy issues with Diane, the president of the local League of Women Voters chapter and an ICL member. They discovered common concerns about the importance of citizen activists and their vital role in protecting the environment, securing social justice and upholding civil rights. When Diane moved to Boise in 1980, they crossed paths again and have been together since 1982.

The first needs that Diane filled introduced her to Idaho politics. Arriving in Twin Falls from the San Francisco Bay area in 1972, she was struck by the lack of laws to protect open space and water quality. She jumped into the League of Women Voters and worked to pass Idaho’s first statewide land use and clean water legislation, as well as the 1974 “Sunshine Act” initiative requiring disclosure of political funding and lobbyist activity. Soon she was serving on the Twin Falls Planning and Zoning Commission. In 1976, she and Chris LaRocco co-chaired the Andrus-Church campaign in the Magic Valley, and she staffed Sen. Church’s last senatorial campaign in 1980.
As a feminist, Diane also actively supported the federal Equal Rights Amendment and a woman’s right to choose. In 1979, she was appointed to the Idaho Commission on Women’s Programs, for which she edited “Who’s Who of Idaho Women of the Past,” by Betty Penson-Ward.

Gary worked his way west from the East Coast, where he began his first career—as a teacher and curriculum specialist—at the Solebury School in Pennsylvania. He was on the founding faculty of Simon’s Rock, an “early college” in Massachusetts combining the last two years of high school with the first two of college in a four-year liberal arts program, now part of Bard College in New York. He also helped found the Pennsylvania Advancement School, developing innovative social studies with inner-city underachievers. In the 1960s, Gary worked in the Johnson anti-poverty program, helping get the Southern Berkshire Community Action Program off the ground in Massachusetts and running a Neighborhood Youth Corps program on New York City’s West Side.

Gary’s first work for the Idaho Conservation League was in eastern Idaho, organizing Mormon farmers to successfully stop a phosphate mine near Soda Springs. He also produced a slide show promoting the River of No Return Wilderness. Several years later, he served on the ICL board and, to protect his favorite fly-fishing stream and roadless area, formed the “Friends of Lime Creek.” In 1981, eager to learn to use television for messaging, he joined the Idaho Public Television staff. For five years, he covered the shenanigans of the Idaho Legislature and produced nightly stories on political, social and environmental issues statewide for “Idaho Reports.”

When Diane and Gary bought a house in the Boise foothills in 1986, they found needs to fill very close to home. For decades, the foothills had been a de facto dumping ground, and the city’s 500-acre Military Reserve next to their property was often torn up by ORVs. Urged by neighbor Alice Dieter, who served on the city parks commission, they formed the Friends of Military Reserve, organized Reserve neighbors and began working with city, county, state and federal agencies to control the destruction.

Looking further afield, Gary envisioned a public-access corridor from the Reserve northeast across what was then private land to the public land higher in the hills. That vision led him, Diane, Barry Rose, John Barringer and many others to found and lead the Boise Front Coalition. Its work in the ’90s developed the constituency that seeded Ridge to Rivers and the Treasure Valley Land Trust — and, in 2001, that voted to pass the Foothills Levy — resulting in today’s miles of public trails through the foothills. Gary and Diane also helped “Save Hulls Gulch.” Gary and Bruce Bistline negotiated the three-way property exchange that stopped residential development in the gulch, and Gary and Diane went to Washington, D.C., to ask Rep. Richard Stallings to secure $900,000 in federal Land & Water Conservation Fund dollars to buy the private land involved.
Early in the 1990s, Diane helped organize the Boise Neighborhood Coalition, which for more than a decade gave citizens the information and contacts they needed to create neighborhood associations (36 are registered today), interact with city officials and work together instead of at odds with each other.

To fill the need for neighborhood representation in city decision-making, Diane sought and received appointment as a Boise Planning and Zoning commissioner. During her six years of service in the mid-’90s, a time of record-breaking population growth in the Treasure Valley and consequent growth-management debates, she helped update the city’s Comprehensive Land Use Plan, working on language that would protect open space and create livable urban neighborhoods. Concurrently, she served on the Boise City Arts Commission and helped write its strategic plan, which included funding public art with a small percent of new public-construction funds. She then shepherded the arts plan into the Comprehensive Plan, which created a substantial, permanent source of funding for public art when the Comprehensive Plan was adopted in 1997.

Concerned about the effects of poorly managed growth, Gary decided to run for the Ada County Highway District commission in 1996. His campaign slogan, “Moving people,” resonated with the public, and he was elected by a large majority. Leaving his day job as information officer for the Public Utilities Commission, Gary filled a vital community need during his tenure. A lifelong commuter bicyclist and the only commissioner who didn’t own a car, he championed a requirement for ACHD to buy land for bicycle lanes on all future arterial and collector roadways. He and Commissioner Susan Eastlake also had the temerity to halt a large development until adequate transportation routes to serve it without damaging an established neighborhood could be built. As a result, developers lobbied the legislature to increase the number of ACHD commissioners from three to five, and spent more than $100,000 to defeat Gary in the next election. After his ACHD service, Gary created the “Idaho Clean Air Force,” a nonprofit that forced the state to address the Treasure Valley’s dirty air.

In 2000, Gary came out of retirement to become executive director of the Snake River Alliance—Idaho’s Nuclear Watchdog. In addition to maneuvering a settlement with the US Department of Energy to (thus far) stop a plutonium plant at the Idaho National Laboratory, he helped ensure that the nonprofit Alliance’s traditionally underpaid and over-dedicated workers would have medical and retirement benefits, as well as better pay. He represented the Zen Buddhist tradition in the Interfaith Alliance, and after 9/11, he helped form the Idaho Peace Coalition.

As a self-described “web-weaver” and “pollinator,” Diane has long used her writing and editing skills to fill the need for more understanding. For 15 years, she edited Idaho Wildlife magazine, prioritizing environmental concerns about wildlife habitat. Then she freelanced an Idaho Statesman column for 13 years, often reporting progressive activities. As a volunteer, she founded and served on the boards of the Log Cabin Literary Center, City Club of Boise, Idaho Nonprofit Center, Idaho Photographic Workshop, Julia Davis Park Second Century Coalition and Idaho Writers Guild. In all of these endeavors, she promoted teamwork, community-building and respecting the rights and beliefs of others.

None of these efforts engaged Diane more than helping start and lead the Fund for Idaho in its first eight years, 2002-2010. She envisioned this foundation filling needs for funding social and environmental justice in Idaho for years to come. It would succeed, she said, as more and more of us realized “We’re all in this together.”
Thanks to the support they have received from each other and from countless friends and associates, Diane and Gary have been able to catalyze hundreds of citizen activists. They look to you to continue the work.