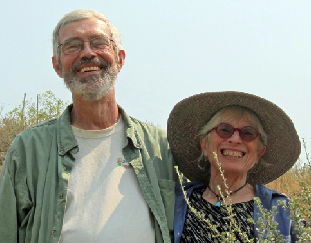 Born and Raised in Forest Grove, OR, Anne has come far. Alan is an Ohioan by birth but an Idahoan by choice. They met in New England, bought their home in Boise in 1977, and have 3 adult children and four grandchildren.
As one of the initiators and drivers of the “Wetlands Coalition,” Anne succeeded not only in preserving the Lower Hulls Gulch area, but also started a community movement that led to the successful Foothills Levy in 2000. Without that original stand, the Boise Foothills would look quite different today.

In order to change the viewpoint of the City with respect to development, Anne served two terms on the Boise City Council . These efforts built on Anne’s previous history of community activism: founding mother of the Idaho Peace Quilters group, volunteer coordinator for Dunia Marketplace, adjunct BSU Sociology Instructor, and staff member of Northwest Earth Institute

Anne is currently part of the leadership team for the Boise affiliate of “Move to Amend,” a national effort to get big money out of politics.

Alan has always been the primary bread earner (Professor of Mathematics at BSU), and quiet fact checker, science verifier, political strategist and towering man who has the big picture, figuratively and literally. Alan worked as much as he could on wildland issues—the various Forest Service Roadless Area Review and Evaluation processes, particularly on the Boise National Forest. He worked to elect environmentally responsible city council members, beginning with Anne, state legislators, and a couple of federal races. Most recently he has focused on climate change.

Alan helped assure that Boise has an environmentally aware city government and delegation to the Legislature. On the board of Sierra Club, he is working on their “Cool Cities” campaign. Alan’s work helped convince Mayor Bieter to be first Idaho mayor to sign the Mayors’ Climate Protection Agreement.

Anne and Alan have been on the forefront of numerous efforts to build stronger neighborhoods through their efforts to promote alternative transportation and walkable neighborhood streets. Remember the “drive 20 mph” movement in the North End? That was Anne. They have turned the land beyond their back yard into a showcase of native plants and pathways. In recent years Anne has been very active in the Occupy Boise movement and both have also worked in voter registration efforts.

Anne and Alan were also recent active participants in the public process related to changes in Idaho Power’s net metering proposed changes (which were handily rejected by the PUC). And I believe their own solar panels are now up and operating. Hip hip hurrah!

Their daily life reflects their values. Life‐long bicycle commuters, they bicycle everywhere they can. They’re quite a contrast to the spandex clad crowd on Hill Road. Their home is heavily insulated, heated primarily by wood, and uses heavy curtains to keep out the winter cold. It also has solar panels.

Ah, Anne and Alan Hausrath, the folks who make most of us seem like slackers when it comes to social activism. We are so glad they do!