Who was Pam Day Baldwin and why did we name an award after her? 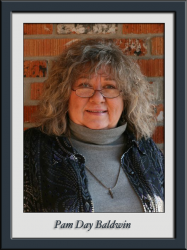 Pam Day Baldwin was an activist and organizer in Idaho for over 20 years. Dedicated to justice and equity, she served as Director of The Interfaith Alliance of Idaho from 2003 until her untimely death in October 2013.

Pam previously served as director of the Idaho Rural Council,on the board of the National Family Farm Coalition, and as an organizer for Idaho’s statewide progressive coalition, United Vision for Idaho.

Pam received the Human Rights Leader of the Year for 2004 at the annual Progressive Celebration & Awards Dinner by United Vision for Idaho. During Boise’s Pride Week in June 2004, Pam and the Interfaith Alliance of Idaho were given the Birch Award for organizing people of faith to work on undoing heterosexism. In 2009, she was honored as a Woman of the year by the Idaho Business Review, and honored in 2010 by the Boise State University Women’s Center as one of Idaho’s Women Making History.

Growing up in west Texas, Pam learned that some people’s worldviews differed from hers. “A worldview is the lens through which you see everything, mine is that of a nurturing parent”. Taught by her parents and grandparents that she could do anything her heart inspired, she knew she could make a difference. Pam dedicated every fiber of her being to her loving family, and to making her community, Idaho, and the world a better place. She worked with many groups to promote equality and progress, while building and shaping our community for the future. Her dedication to healing with love, dismantling injustice and racism, continue to inspire those who knew her.