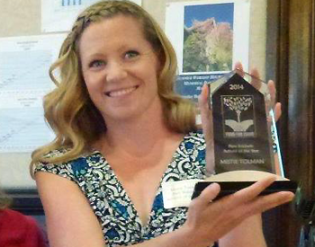 Raised in an LDS family in Meridian, Mistie has traveled a long road as a result of her coming out. Her experiences propelled her to improve the atmosphere for Idaho’s LGBT community.

“Across the state, people are growing restless and frustrated,” said organizer Mistie Tolman. “Harm is done when lawmakers fail to say in law that cruelty is wrong. For eight years now we’ve been asking for the dignity of a public hearing, an open discussion, and for them to hear us.”

Add the Words, Idaho, grew from her desire to reduce the inequalities for Idaho’s LGBTQ community, women, and other marginalized groups. She reached out to a local working group that was working on non-discrimination legislation, and it eventually morphed into Add the Words, Idaho.

Tolman serves as Co-chair, Spokesperson, and Treasurer of Add the Words, Idaho, as well as Treasurer for the LGBTA Democratic Caucus. She lives in Meridian, Idaho with her four children and wife, Karen.