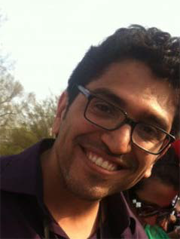 One of the “the Dreamers”, Fernando is undocumented and unafraid. Born and raised in Cuautitlan Izcalli, Mexico, in 2001 he came to Idaho to attend Boise State University and worked with Idaho Community Action Network from 2004- 2009.

His status prevented him from taking a teaching position at the University of New Mexico but continued to stay politically involved. In his work in Idaho since 2011, Fernando has played multiple roles and has been a key catalyst for two major social change initiatives during the past couple of years.

Fernando helped build ICAN’s immigration reform campaign from the ground up, which received national attention in 2013 and coordinated and directed KBWE, the Spanish language community radio station that ICAN created for the community of Burley. He has also worked with the Alliance’s Health Rights Organizing Project’s Racial Justice Agenda; led ICAN’s Civic Engagement campaign in 2012; trained leaders and organizers on how to set up a Small Business canvass in NY, OR, and ID; and led a major direct action at John Boehner’s (Speaker of the US House) DC office.

In these campaigns, Fernando serves as a low key bridge for different elements of the community to realize their collective power to create change.