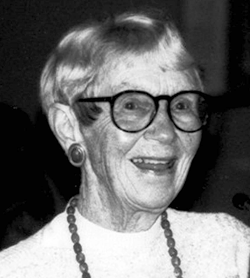 When Nelle Tobias was given a Conservation Pioneer award in 1996,her response was, “Well, I didn’t do much.” That humble statement belied Nelle’s fierce and steadfast work of letter-writing, testifying, volunteering, and giving money to fight the forces that threatened Idaho’s wilderness and to preserve the history and culture of Idaho’s inhabitants.

Nelle Tobias was a petite, sandy-haired woman with birdlike bones, enormous blue eyes, and a shy smile. Her connection to the land began on the family homestead. With the wistfulness of a four-year-old, Nelle watched her father clear sagebrush from the mouth of Dead Horse Canyon near the Snake River and wished that he would leave it the way it was. Nelle recalled, “I only know that when the brush was cleared from what my father called ‘a wilderness’ I felt a loss…and deplored that my pleading for its retention had been futile.”

She fell in love with the Payette River, Payette Lake, and the rich meadows of Long Valley, when she and her parents first visited it in 1911. Nelle was 5 years old. In her words: “It was still in the horse and buggy days when I first came to McCall. On each trip to Long Valley and Payette Lake, I watched for the first pine tree. On leaving, I’d look back and say ‘good-bye’ to the last one. I became a part of the land, and the land became a part of me.”

After getting a graduate degree in architecture at Oregon State College (now OSU), Nelle took a 16,000-mile road trip with a girlfriend. Nelle returned home with a keen appreciation of what a good tourist cabin should look like and renewed interest in sharing Idaho with the rest of the world. So she built the Edgewater Cabins in McCall in 1936.

By the 1960s, Nelle began to regret that she had participated in the tourist industry. The small town of McCall, among so many others around the state, had begun to loose its rural culture. Worse, from Nelle’s point of view, Idaho’s pristine roadless areas were under attack from resource extraction, development, and other economic interests. Empowered by the same love of Idaho that had spawned her tourist cabins, she began to do “what must be done” to fight against the exploitation of Idaho’s resources. Among her accomplishments are the documentation and preservation of the Wees Bar Petroglyph field on the Snake River, creation of the Nelle Tobias Research Center in Roseberry, and, with a small group of other committed people, the designation of the 3.2 million acre River of No Return Wilderness (now the Frank Church RNR Wilderness).

Nelle also walked the talk. She lived an environmentally-friendly life: reusing and recycling, using solar power and a small wood-burning stove, and driving fuel efficient cars. Using an old manual typewriter to type over a thousand pages of testimony, letters to the editor and to politicians, Nelle seemed immune to modern consumerism.

During her last forty-plus years, Nelle inhabited a cabin she designed and helped build, on a piece of land that overlooked the rich green meadows of Long Valley to the west and nearby Jug Mountain to the east.

Nelle left nearly her entire sizeable estate to twenty local and national nonprofit organizations that she had been anonymously supporting for decades.