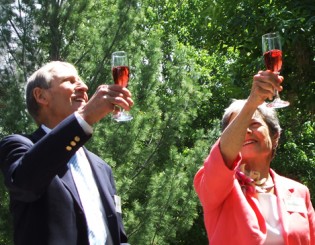 Money and facts alone do not change the world. Only when they are set in motion by love do they make a lasting difference. Together Doug and Ann Christensen have put their hearts, resources and efforts into making our state and the world a better place.

In recognizing their efforts, Fund for Idaho celebrates the partnership, compromise, acceptance of hardship, and love that Ann and Doug have demonstrated for the 46 years they have worked as a team to make the world a better place.
Recognizing the Christensens is a way to acknowledge that communities – rather than individuals – create social and environmental change.

The Christensens live the changes they would like to see in the world. They recycle and compost, built their home with sustainably harvested wood, conserve energy, use solar energy in their home, drive a hybrid car, buy organic food (locally in season) and avoid use of home and garden chemicals. All the while, they smile.

The Christensens have tackled a challenge many philanthropists face, and they set an example others can follow. Their wealth was earned, not inherited, and as their financial situation stabilized, they decided to put their money where their hearts were. Requests for funding came and they wrote checks as they could.

In 1992, they created a family foundation. To separate this from their personal finances, the foundation invested in real estate to create a more stable funding base.The Christensens have also planned to leave a legacy gift to the family foundation to ensure their assets will make a lasting gift that lives beyond them.

Doug and Ann also promote philanthropy as a family value, teaching their daughters to be active, engaged citizens who are making the world a better, more sustainable place. Eloise and Aimee Christensen are living testament to their parents’ lifetime commitment to social justice and environmental protection, and many community activists have benefited from their nurturing.

Doug and Ann have invested their time and resources in so many organizations throughout their lives. Fund for Idaho celebrates the Christensens as living examples of excellence in philanthropy. It is their spirit, attitude, and love that sets them apart.