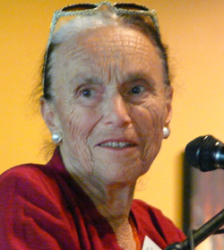 Reared on the East Coast in a family of means, Kathy Troutner attended the dance program at Bennington College, the birthplace of modern dance, and entered the arts in the 1930’s as a professional dancer in New York City. She taught for modern dance pioneer Hanya Holm in NYC, and was still teaching dance in Idaho at age 80.

In 1949, as a divorcee with two young sons, Charles and Jim Cockey, she moved to Sun Valley, Idaho. There she met Boise architect and inventor, Art Troutner. They married in 1954 and had two children, Art Jr. and Tara. Their round Boise Foothills home became a Mecca for artists in all media, a place of impromptu play readings and spontaneous music. Kathy hosted professional artists and Boise High School students and never made a distinction between the two, believing all artists are vibrant, valuable people who should be nurtured and encouraged.

Over the years, she mentored several young artists who turned art into their life’s work. For more than half a century, she has made significant anonymous gifts to the visual arts, theater, music and dance communities in southwestern Idaho.

Kathy’s passion for the arts is equaled only by her passion for nature. She has hiked throughout Idaho and many other states, and intimately knows the environment near her homes in McCall and Boise. At age 70 she “jogged but not raced” Robie Creek and “did it nicely.” Nine years earlier, she had married Earnie Johnson, who flew Flying Tiger missions over China in WWII.

As a board member of the Ada County Fish and Game League and steadfast supporter of the Idaho Conservation League and Idaho Rivers United, Kathy contributed substantially to the movement’s collective financial health and on-the-ground effectiveness. Kathy put Idaho on the map for The Nature Conservancy in the 1960s, helping found and chairing the state chapter of the TNC for six years. Her contributions kept early-day, shoestring Idaho environmental protection organizations afloat, including the High Desert Preservation Council.

In 1999, she played a pivotal role in securing permanent protection for Box Canyon, a remarkable spring canyon ecosystem on the Snake River, by making a seven-figure gift to the Nature Conservancy to pay for the area, which ultimately became a state park.

In her understanding of the value of philanthropy and the importance of protecting the natural environment of Idaho and the planet, Kathy truly reflects the spirit of Nelle Tobias.